On 16th August 2016 at 9 pm we are starting a new edition of VideoWall in Židovska Street in Ljubljana. You are kindly invited to attend the opening of the video Brotherhood and Unity by Spanish artist Eriz Moreno.
The name and inspiration for this project both come from the “Brotherhood and Unity Highway”, a highway that stretches more than 1180 kilometres through Yugoslavia, connecting its six former constituent regions. It starts at the Austrian border and goes through Ljubljana, Zagreb, Belgrade and Skopje to the Greek border in the southeast. It was the first and only modern road built to international standards in Yugoslavia.

In the 1960s and 1970s, the road became a very busy and dangerous route for Turkish, Greek and Yugoslav immigrants working in West Germany and Austria (in German called “Gastarbeiter”, “guest workers”). For the most part they used it to visit their countries of origin during the summer holidays. Entry to the communist (but not aligned) Yugoslavia was much easier for people from NATO countries, including Germany, Turkey and Greece, than entry to any of the communist Warsaw Pact countries from the Balkan region, which could have provided alternative routes.

In general terms, the Brotherhood / Unity project has an interdisciplinary approach to the region as a major objective. The project combines different forms of perception to get an overview of perspectives from what was and is Yugoslavia. To get input for the project a road-trip has been completed, travelling through all the regions that were part of the former Yugoslavia. The trip aimed to document the idea of Yugoslavia (through photography, video, audio …) by following the highway and its history. To complete this “personal view” different materials (books, videos, pins, coins …) related to Yugoslavia were collected along the way. The goal was to cross-cut the different layers of history of a country that, although is not existing anymore, is still present in the collective memory of the region presented here.

“At the video exhibited in VideoWall, I have put together all the videos recorded from the travel in the highway on a single video that is as long as the travel from Ljubljana to Prilep in Macedonia – the road on which the immigrants and tourist were and are travelling. Video is also the starting and ending part of my personal artistic project – travelling and discovering the past and the present of this region.” 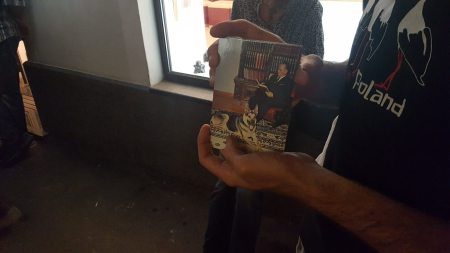 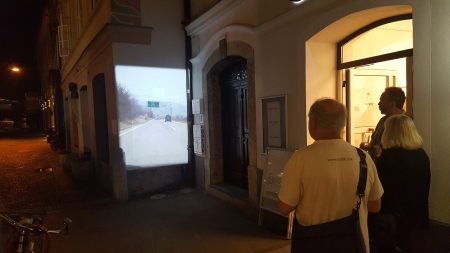 Eriz Moreno (b. 1982, Bilbao) holds a Master’s in Fine Arts from the University of La Laguna. He has been awarded various grants and prizes for projects in Armenia, Germany, Spain, the USA, Macau, Greece, Poland and the UK. Amongst exhibitions held since 2013 are his solo works Projekt Beton (Poland, 2013), the 18/19/2013 project to mark the 200 anniversary of the Battle of the Nations (Germany, 2013; Spain, 2014), and Bratstvo / jedinstvo in the Rekalde exhibition space in Bilbao (2016).

VideoWall is an open air video gallery, an ever-changing graffiti, with a new video loop being presented every two weeks. Each work is screened daily between 9 pm to 1 am in autumn and 6 pm to midnight in winter. The works are in line with the context of the street and open-air video gallery.

VideoWall is produced by famulVideoLab (KD Galerija GT), cofinanced by City of Ljubljana and supported by Galerija Hest. Executive producer is Polona Zupan / Pila Rusjan, her co-worker is Miha Kelemina.